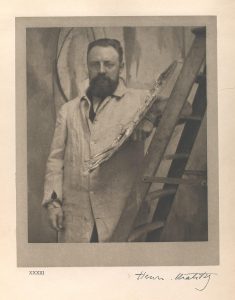 Something other than fashion statements occurred in 1905 Paris:  Henri Matisse, a former law student, launched his infamous “Fauve” (Wild Beast) group show at the Autumn Salon, the latest version of the then defunct, juried Louvre production, now overseen by artists, not bourgeois critics. The Spaniard, Pablo Picasso, had been in town for five years.  He was on a very different quest, inspired by Cezanne, for ancient and indigenous African sculpture. They met the following year at the apartment of the American expatriate writer Gertrude Stein. Her rapidly expanding intelligentsia open house was the “must go” event for all aspiring writers and artists Paris.  Eleven years younger, the ever- pugilistic Picasso set out on his own course to compete from a different platform, but always with an eye and vailed nod to Matisse.  When Matisse died in 1954, Picasso said, “In the end, there is only Matisse.”  Quite a compliment from an artist who rarely praised another artist. Picasso died in 1973. Long lives, great art.

Willard Lustenader is an adjunct professor dart history currently teaching at Sacred Heart University, Albertus Magnus College, Gateway Community College and Choate Rosemary hall. He was educated at Vassar College , the Courtauld Institute of Art, and the University of London where he received his graduate degree in art history. He has been exhibiting his art since his teenage years in Rochester, New York, and eventually mentored with the renowned realist painter, Nelson Shanks in Philadelphia. After a brief stint in the Wildenstein Galleries in NYC, Will devoted his career to painting. He is presently represented by the Fred Giampietro Gallery in New Haven CT. His work has been shown in Europe and many venues across the country, including the New Britain Museum of American Art, The San Diego Art Institute, The Visual Arts Center of New Jersey, The Neuberger Museum, and the Brad Cooper Gallery in Tampa Florida.